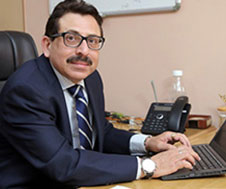 Mr. Ajay Kapoor is Chief-Legal & Regulatory of the Tata Power Company Limited. He had joined Tata Power-DDL in October 2002, when the company had almost started its operations on taking over the erstwhile DVB’s distribution business in North and North West Delhi. Mr. Kapoor is an Honors graduate from the prestigious Shri Ram College of Commerce, Delhi University, India. A qualified Chartered Accountant he also holds MBA and LL.B degrees. He has been a rank holder in the CA course, and topper of his batch in MBA for which he was awarded the Gold Medal.
He is an alumni of Columbia Business School, NY. He has also attended Executive Education Programs of Stern Business School and Columbia Business School, New York. He was also a participant at Tata Group Strategic Leadership Seminar, apex training program me of Tata Group, conducted by Harvard Business School.

He completed his articled training with M/s. Lovelock and Lewes (Indian associates of erstwhile Coopers & Lybrand – now merged as PwC) and post qualification he has worked with ITC Limited, Hitech Drilling, (a joint venture of Tata Group and Schlumberger of France in the Oil and Gas drilling business), Network Ltd., etc. in a career spanning 30 years. He has extensive experience in all areas of finance, ERP implementations, and has handled matters relating to international collaborations, joint ventures in India and abroad, financial restructuring, policy advocacy, capital raising, and acquisition besides handling legal advisory and has handled electricity litigation matters at all levels/forums for Tata Power-DDL.

During his tenure as CFO, Tata Power-DDL was awarded the ‘National Award for Excellence in Cost Management’ in the category of “Service Sector with turnover of more than 1,000 Crores” by the Institute of Cost & Works Accountants of India (ICWAI) in 2007 and again in 2013 & 2015. This was for the first time in India that any electricity distribution company was conferred an award for cost management initiatives in India. Mr. Kapoor has been recipient of ‘CFO 100 Roll of honour’ from CFO India for four years consecutively from 2011 to 2014. In 2015 he was awarded the CFO League of Excellence Award by CFO India. He has also been recognized as Digitalist Top 25 Thought Leaders in India by SAP in 2015. He has been featured in many magazines and journals and is a regular speaker at various forums.