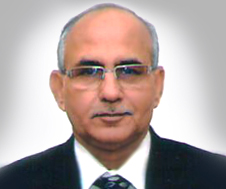 Highly acclaimed Chartered Accountant for more than 45 years, Mr. Amarjit Chopra is a senior partner of GSA & Associates LLP Chartered Accountants New Delhi. He was the President of the Institute of Chartered Accountants of India during 2010-11 and Vice-president the year before. He was the Chairman of National Advisory Committee on Accounting Standards by the Central Government for four years till 30th September, 18. He has recently been nominated by Govt of India as a member of National Financial Reporting Authority(NFRA) and also to a Group constituted by the Govt of India to make suggestions on Consultation Paper on Auditing Profession. He has been nominated by the Central Govt. on Bench- II of Disciplinary Committee of ICAI for a period of four years from 2018 to 2022. He was also nominated by Central Govt. as Chairman of Committee to revise Companies Auditor’s Report order 2016. He was also nominated by the Central Govt. on the Standing Committee for Decriminalising the Companies Act 2013.

Earlier he was nominated as a member of Investor Education and Protection Fund Authority by Central Govt. of India. He was also nominated by IRDA on the standing committee of Accounting Issues in Insurance Companies. He chaired several important committees that dealt with Auditing and Accounting Standards, Corporate Governance and Banking at the national level. He participated in Board meetings of IFAC, CAPA and SAFA at the international level.

Banking, Finance and Insurance sector interested him immensely which could be evidenced by his nomination as ,independent director to Bank of Baroda (2006-09) and Indian Bank (2011-14), member of the Securities & Exchange Board Committee on Disclosures and Accounting Standards, Board Member of the Insurance Regulatory Authority of India and member Audit Committee of the Reserve Bank of India.

He contributed significantly to the development of the auditing and accountancy discipline in India over various years. Besides chairing the other Committees of ICAI, he was the Chairman of Accounting Standards Board and Auditing and Assurance Standards Board of ICAI for two years each. He was responsible for introducing IFRS Certificate Course in India and Middle East. He has been a part of IFRS training programmes for members of Nepal and Myanmmar Institutes. Also he lead the teams for conducting IFRS training programmes in Bhutan. Also he served the International Audit and Assurance Standards Board of IFAC as Technical Advisor during 2009-10. He served on the IFAC Committee of Professional Accountancy Organisation Development for a period of three years (2010-13). He was the Vice Chairman of the committee for the year 2013. Corporate governance and due diligence attracted his attention and was nominated to the SEBI Committee to review the performance of corporates as regards governance.
He was appointed by the Government of India to investigate complex issues in relation to M/s Xerox India Ltd. He also served as Vice-Chairman of the High Powered Committee of ICAI that examined Satyam fraud in India and investigated several other matters during his career as professional auditor.

A prolific speaker, he has delivered more than 2900 lectures on various topics including Accounting and Auditing Standards, IFRS, Banking including Financial Inclusion, Insurance, Corporate Laws, Corporate Governance, Ethical Standards ,Peer Review both in India as well as abroad. He has been included on the roaster of IMF as a resource person and has conducted missions in Mauritius, Bhutan and Seychclles. He has contributed articles in journals on Accounting, Auditing and Corporate Governance and has been a part of panel discussions on these subjects on some of TV channels.

He is presently on the Board of TATA Power Delhi Distribution Limited, RICO Auto Industries Limited,

RICO Investment Ltd, Roop Automotives Ltd, and ICAI Accounting Research Foundation Ltd, and is on the Board of Governors of Institute of Management Studies Ghaziabad. He has keen interest in music and sports particularly cricket.